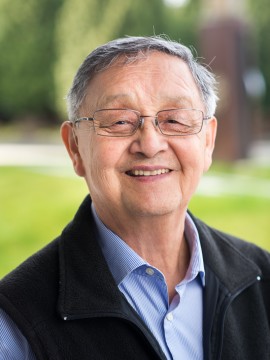 Larry Grant, Musqueam Elder, was born and raised in Musqueam traditional territory by a traditional hən̓q̓əmin̓əm̓ speaking Musqueam family. After 4 decades as a tradesman, Larry enrolled in the First Nations Languages Program, which awoke his memory of the embedded value that the hən̓q̓əmin̓əm̓ language has to self-identity, kinship, culture, territory, and history prior to European contact. He is presently assisting in revitalizing hən̓q̓əmin̓əm̓ in the Musqueam Language and Culture Department, and co-teaching the introductory hən̓q̓əmin̓əm̓ course through UBC.

Larry is the Elder-in-Residence at UBC’s First Nations House of Learning. He is a Faculty Fellow at St. John’s College, and the inaugural Honorary Life Fellow for Green College. In 2010, he received the Alumni Award of Distinction from Vancouver Community College, and in 2014, he became an Honorary Graduate from the Indigenous Teacher Education Program (NITEP) at UBC.

FNEL 101 Introduction to a Salish Language I
Emphasis on accurate pronunciation, conversation, basic grammatical structures and listening and literacy skills, and the study of oral traditions in their cultural context. No prior knowledge of the language is assumed.
~Prerequisite: none
Term 1