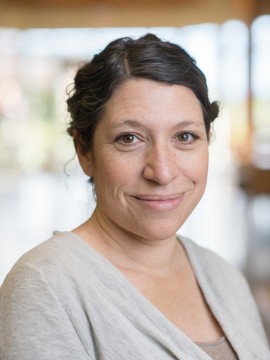 Daisy Rosenblum (PhD University of California, Santa Barbara) focuses on the multi-modal documentation and description of indigenous languages of North America, with an emphasis on methods, partnerships, and products that contribute to community-based language revitalization. She currently works with speakers of Kʷak̓ʷala, a Wakashan language of British Columbia, to record narrative, conversation, and other types of spontaneous speech for today’s and tomorrow’s learners and teachers of the language. These recordings form an annotated corpus of spontaneous speech in two dialects, archived locally and at the Endangered Language Archive at SOAS. Practical research interests include documentation workflows, data management, archival best practices, digital repatriation, and the decolonization of linguistic research. Academic research interests include the grammar of space, argument structure, alignment, deixis, voice and valence, as well as mechanisms of contact, diffusion and change in the Pacific Northwest and Mesoamerican linguistic areas. Before becoming a linguist, Daisy taught art and designed curriculum in public elementary schools, museums and libraries in Brooklyn and Queens, was coordinator of Immigrant Artist Services at New York Foundation for the Arts, and worked as a shadow puppeteer.

FNEL 141 001 (3) Introduction to a Wakashan Language I : Kwak̓wala (Northern Wakashan)
Emphasis on accurate pronunciation, conversation, basic grammatical structures, listening and literacy skills, and the study of oral traditions in their cultural context. No prior knowledge of the language is assumed. Not offered every year.
Prerequisite: None
Term 1

FNEL 282 001 (3) Structures of Endangered Languages: Conservation and Revitalization
Development of skills in the documentation, transcription and analysis of grammatical structures in endangered languages, focusing on the diversity within BC Aboriginal languages. Applied techniques in documentation, workflow and multi-media digital annotation, guided by community-based ethical protocols and conservation/revitalization goals.
Prerequisite: None
Term 2

FNEL 381 001 (3) Biocultural Diversity: Language, Community, and Environment
Critical exploration of the links between linguistic, biological and cultural diversity; including connections with linguistic relativity, linguistic identity, language and place; and strategies for collective, interdisciplinary action to promote and support the protection of languages, cultures, and the environment.
~Prerequisite: None.
Term 1

FNEL 481 001 (3) Heritage Resources in Endangered First Nations Language Revitalization
Examines the complementary and intersecting roles of libraries, archives, and museums in collections acquisition, development, curation, preservation, and access traditions pertaining to First Nations languages, to explore how each can contribute to endangered language and cultural heritage sustainability.
~Corequisite: All of FNEL 281, FNEL 282. (Corequisites can be taken either alongside or prior to FNEL 481.)
Term 2